The origin of Los Cerrillares is unknown. The name comes from the word cerril, which means mountainous. The well-known history begins with D. Agustín Velasco and his sister cousin Dña. Magdalena Velasco who inherited the lands of “El Retamal” from their parents, the Hnos. Velasco, known as “Los Villarejos” due to their origin from the Villarejo village, in the vicinity of Madrid. The “Retamar” then extended from the road to Maestro Alonso, including the Olivos de la Leona and La Haza del Enganchá. It had a pigsty and an oil mill that is now the main house of Los Cerrillares. We do not know the date of construction of the mill, since all the documents were lost during the civil war, although in a sundial in front of the farm the date of 1842 is inscribed. The two first cousins, D. Agustín and Dña. Magdalena, the farm was divided: D. Agustín stayed with the right margin of the Higuillo that had approx. 140 bushels of land and Ms. Magdalena with the olive trees on the left margin of the Higuillo with approx. 140 fanegas of land.

Around the same time the brothers “Los Gregorios”, Gumersindo, Gregorio and Gonzalo, had for many years back the lands of the “Los Cerrillares” farm of approximately 900 fanegas with a house and a zahurda, today known as the “Cortijo Viejo” “of the Cerrillares, built in 1868. The Gregorios sold the Olives of the Marcher to D. Juan Román Sosa, who passed them on as an inheritance to his son-in-law D. Pedro Molina.

D. Agustín bequeathed his lands from Retamar to his daughter María Rosa, married to Mr. López de Córdoba. These Messrs. Sold it to D. Blas Cazo Casado de Écija, who in turn bought Los Cerrillares de Los Gregorios. D. Blas rented the land to Br. Rodríguez Caroches, Clemente, Juan, Antonio and José, known as “The Ruteños” of the Rute town, for approximately 30 years. These Messrs. Kept the farm in very good condition, removed much forest, cut down all the trees and tilled the land. His 90 cows, 600 sheep, 200 goats, 100 breeding pigs and 400 mountain pigs fed exclusively on the farm. D. Blas also hired Mr. Antonio Rodríguez de León, mining engineer, and exploited some iron mines on the farm, p. ex. in the Master Alonso, the Quemado mine, in the Marchante stream and near the Cañada de los Lobos. Due to economic problems, it was necessary to sell the farm to D. Jerónimo Domínguez, Marqués del Contadero.

The Marqués del Contadero, mayor of Seville, continued to fix the farm, installing electricity in the farmhouse. He bought several plots of olive groves that were in the area of ​​La Leona. Around 1955 he renovated the mill, building a second floor with beams and covering the jars that were between the main house and the miller’s house. This house was smaller and added an extension that would become the guard house. His first manager, Luis de Berrocal, came to live in this house with his family and his nephew Antonio Longo, who had a newborn son. Luis was transferred to another farm of the Marquis and Antonio Longo replaced him in the position of manager and guardian. He died tragically in 1978 in a road accident going from the farm to the Puebla fair. His brother, Manuel Longo, until then home and occupant of the Casa del Casero del Cortijo, today an apartment called “Los Lobos”, became the manager and guardian of Los Cerrillares.

When the farm belonged to the Marqués del Contadero there was another guard, Manuel de Almaden de la Plata, who lived in the old Cortijo. During the winter seasons lightning always fell on this farmhouse and that’s why he spent the winter in the Chinese house, which was built precisely for this reason, and the summers in the farmhouse, today called “El Pantano”, where he died. The Marques de Contadero bequeathed the estate to his daughter, Mrs. Concepción de Ávila, who married D. Francisco Javier Mencos Fajardo, Marques de las Navas and Navarra.

D. Javier made many works on the farm from 1945 onwards, executed by D. Manuel Abril Domínguez de La Puebla and by a mason from Carmona, nicknamed Labumba. They put the phone, they extended the well of Tajar, they constructed several ships, the two swimming pools, they changed the roof of the main house of tiles for Italian uralita and they raised the farmhouse for the workers where today the hotel is. All these works, as well as many work tasks on the farm were widely subsidized by the government. He also carried out several land changes. To get the olive trees from the Marchante, he changed the Tío Mateo hill, today inside the “La Florida” farm of Pedro Molina Lisboro, owner of “El Marchante” in inheritance. With Manuel Hinojosa Santana he exchanged a piece of land between the “Piedrasblancas” and “El Monte” farms for a piece of land in “Piedrasblancas”. With Cristóbal Román Sánchez he changed the entrance from the road through an olive grove in “La Leona”, due to the prohibition of Mrs. Magdalena to make way for her farm “El Retamar”. The entrance at that time was made by La Finca “El Retamar”, passing through “El Higuillo” where today are the waterholes. 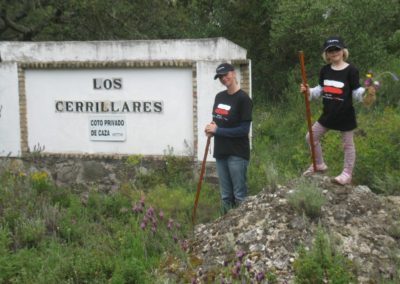 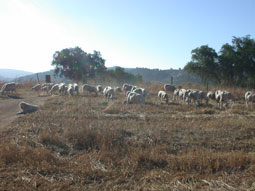 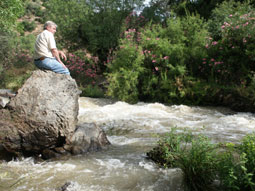